RSS Feed
← I’ll Tell Myself I Was Tired
Way Back to When I Posted On Time? →

Way Back to When I Was the Title Character

I was lamenting that I had nothing good to make a blog post about (it’s too bad I don’t do a work blog, because lately it seems all I do lately is go to work) when I remembered:  Wayback Wednesday!  I can look in my Media Library for older pictures and reminisce about when I used to have a life!

I did the part better with my own hair.

This is me as Roxalana Druse, a local historical murderers.  I was being her ghost for a tour of the 1834 Jail in Herkimer, NY.  I played her in Roxy by Jack Sherman, a play sponsored by the Herkimer County Historical Society at Ilion Little Theatre in 2015.  To explain the caption: I had longer hair then; for the Jail thing I wore a wig.  That is my husband, Steven, next to me.

My Waybacks and Throwbacks often involve theatre, don’t they?  This is the cast of Rubbed Out at Ruby’s,  an interactive , murder mystery presented by LiFT, Little Falls Theatre Company. I was Ruby.  I believe those were the only two times I played the title character. 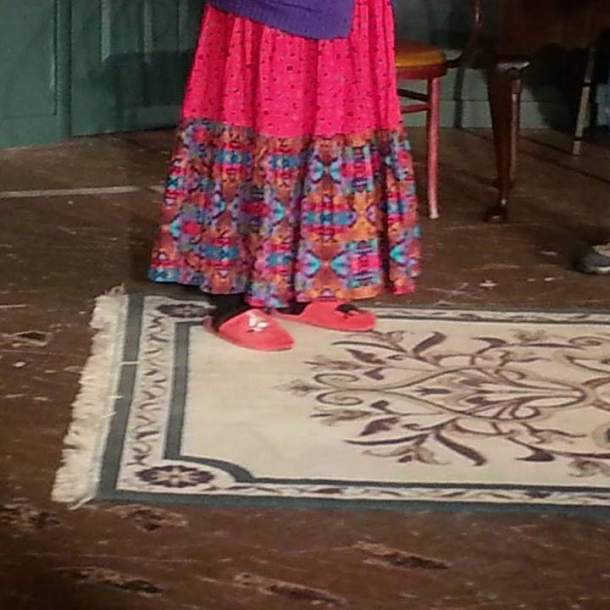 I wore those slippers out.

This was not in my Media Library; I had to find it in my Facebook profile pictures.  I remembered I was kind of the title character in The Busybody, presented by Ilion Little Theatre in 2015.  The Title was a play on words, because while my character was a bit of a gossip, the plot also involved a disappearing corpse.

So I guess it was all about me for this post.  Then again, it is a personal blog.  Thank you for tuning in!

Posted in humor, personal, Way Back Wednesday. Bookmark the permalink.
← I’ll Tell Myself I Was Tired
Way Back to When I Posted On Time? →