It’s that awkward moment on a Saturday when I want to make my blog post before Steven gets home, but I really don’t know what to write about.  I have not done enough to fulfill a true Scattered Saturday post.  I feel I cannot do justice to the one cool thing I did today, but I suppose I could try.

I dressed as a wizard and went to the Mohawk Valley March for Babies fundraiser for the March of Dimes and Mohawk Valley Community College.

I really did not need to ding her with the wand; she is already enchanting.

This is the chair of the event, me, and two other members of LiFT, Little Falls Theatre Company, also dressed up to add to the festivities.  The Power Ranger was the hit of the day, with several kids offering high fives and asking for pictures. 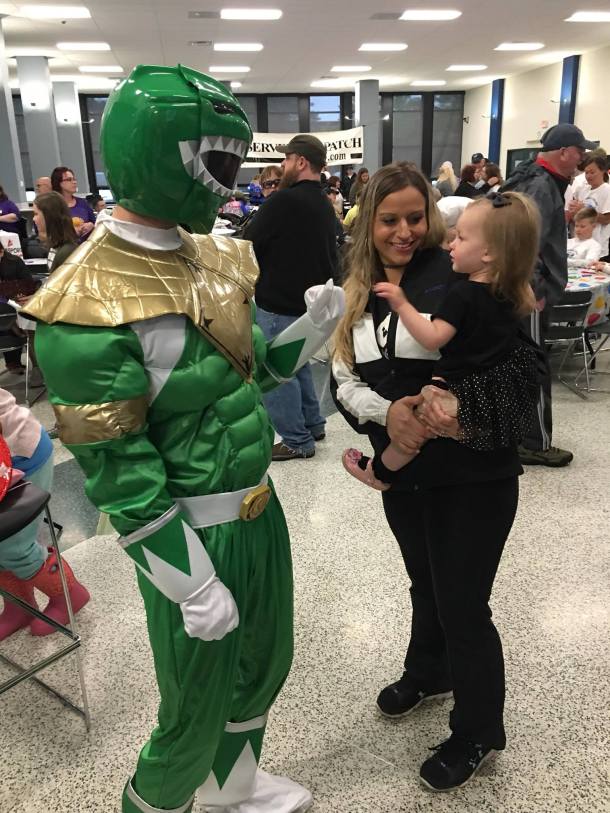 Who could be scared of a big green Power Ranger with Mom around?

A few of the kids were put off by the mask, but mostly they loved him.  I am the one that made a couple of kids cry, although I tried to keep my distance when I saw they were leery of me.  For heavens’ sake, I came dressed as a wizard not a witch, and I thought I was a SILLY wizard (because I always say, go with your strengths).  No matter, many people were amused by me.  I walked around waving my wand and danced to the music when possible.

At one point, a gentleman asked me and Kim what characters we were.  I said, “I am Cinn-da-ba the Wizard of Odd!  And this is Princess… Naratilovna.”  I had to repeat the name.  “It’s Russian,” I explained.  “But she is not Princess of Russia, but of an obscure little country north of Siberia.”  I could not come up with more on the spur of the moment.  Then I confessed that I had made up both characters but perhaps I would write a story featuring them.

So now I have a story to write.  And I can barely manage a blog post! No matter; I am over 300 words and I have given a brief plug to the March of Dimes and the Mohawk Valley March for Babies.  This is a worthy cause, because, you know, babies.  And I’m sure the ones I made cry have gotten over it by now.