Never Mind Lame, How About Love?

Yes, I was lame enough to miss my Lame Post Friday post (and my predictive text thingy is really falling down on the job; it used to always jump right in with “Post Friday post” when I typed in “Lame”) (pecked in one letter at a time with the stylus, I like to add).

Where was I?  Ah yes, posting late and lame, neither of which is an unusual situation for me.  Yesterday morning I made Thursday’s post with no apology for its being late.  Full disclosure: at first I typed in a couple of sentences about it but deleted them.  I did not want to distract from the post, which I thought was a good, non-lame one, plugging both a local business and my upcoming Shakespeare play (alas, I did not get a lot of blogger love, but you’ll have that). 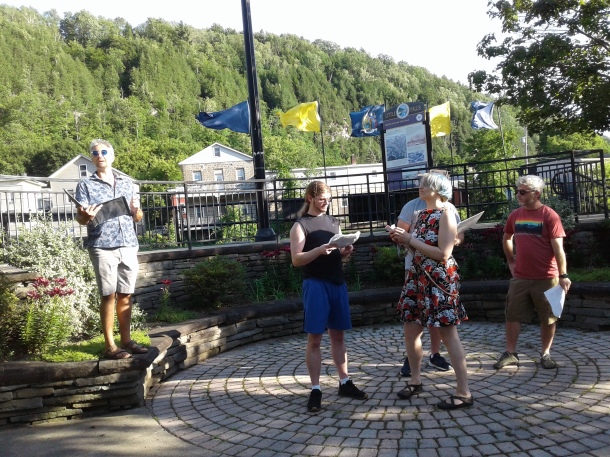 I love our cast.

Since I mentioned our Shakespeare play, I thought I’ve throw in another rehearsal shot.  It took me a little time to be sure I wasn’t uploading the same picture twice.  Now that I have more storage space in my Media Library, I am careful of preserving it.

I will just mention that this blog may become All Love’s Labour’s Lost All The Time.  One week from today is Opening Afternoon!  Hmm, that does not have the same ring to it as Opening Night.  Never mind.  It will be fun.

Once again, Love’s Labour’s Lost, will be presented by LiFT, Little Falls Theatre Company at Benton’s Landing in Little Falls, NY, August 13 and 14 at 1 p.m., part of Little Falls Canal Celebration. Free admission! I hope to see you there!