Lame Post Friday is getting lamer and lamer, I fear.  Perhaps I am coming to the end of my usefulness as a blogger.  SAY IT AIN’T SO!!!!!

I have been having a fun evening.  My husband, Steven, and I went with our friend Kim to a beer tasting at Route 51 Beer Belly Bob’s Discount Beverage Center in Ilion. We purchased some beer, of course.  I do not drink as much beer as I used to, but sometimes a beer really hits the spot.

Kim had commitments elsewhere, so Steven and I continued to dinner alone at Salvatore’s in Herkimer.  We had soup and garlic knots.  Yum! Then Steven had a cup of coffee and I inadvisedly had a piece of chocolate spoon cake for dessert.  Oh, was it ever good!  However, it was also very rich and filling.  If I dare to step on the scale tomorrow morning I will no doubt find I have jumped up three or four pounds.

Now we are home, and Steven put in our DVD of Mr. Magoo’s Christmas Carol, one of his (and my) favorites. 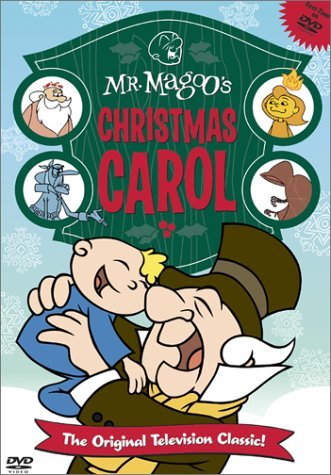 Oh, sure, just give away the ending!

Christmas time is all about revisiting old favorites, isn’t it?  When we got to Salvatore’s, we had to sit in the parking lot to hear the ending of “Do They Know It’s Christmas” by Band Aid.  I love that song and had not heard it yet this year.  Inside the restaurant, we enjoyed more favorites:   “Jingle Bell Rock,” “Sleigh Ride,” and Brenda Lee’s “Rockin’ Around the Christmas Tree,”  as well as another favorite I had not heard yet this year:  Paul McCartney’s “Wonderful Christmas Time.”

Well, talking about that has put me in a sweet, cuddly Christmas mood. I’m going to knit and watch the rest of this Christmas special.  Full disclosure:  next I may watch Dateline.  After all, I still gotta be me. Happy Friday, everyone.

Thank God for Snapped on Oxygen!  There I was, listening to Christmas music while trying to get presents together, and all of a sudden I just couldn’t take the Christmas!  I wanted murder!  Oh dear, that didn’t sound very good, did it?  I was going to post this as my Facebook status when I thought it might do for a blog post.  Perhaps it is too macabre and unseasonal a thought for either venue.

So this was going to be a Scattered Saturday post, or perhaps a brief shout-out to Heidelberg Bakery, where I went first thing this morning. It’s just going to be one of those Posts About Why I Can’t Write a Post Today.   I think my post-Christmas letdown came early, so folks who are still high on the fa-la-la might want to skip this one.

Christmas Eve used to be my favorite day of the year.  I realized today that this is no longer the case.  And, you know what?  As soon as I typed those last two sentences, I no longer wanted to kvetch.  Why should I rain on everybody else’s holidays?  That’s more of a job for Ben’s Bitter Blog.  I wouldn’t like to horn in on his territory, although there might yet be room in the bitter pond, even with the incredible number already there.

The fact is, writing is working its usual magic.  Putting words on the keyboard (paper works, too) is putting me in a better mood.  I DO love Christmas!  And I love Christmas Eve! And I love watching true crime shows!  I’m going to write a murder mystery that takes place at Christmas-time.  In the meantime, Merry Christmas to all my readers, or Happy Hanukkah, or Happy Saturday.  I hope your December 24 is grand.

(Although I guess my WordPress site is going to say this was posted on the 25th.  I am always off kilter.)

Today I attempt to follow my own advice from yesterday and skip the futzing. I have had no Mohawk Valley adventures since yesterday, so I will attempt some seasonal commentary.

The other day I posted a Facebook status that got some good attention. I share it again, with apologies to any readers who are also Facebook friends: So if I know Dasher and Dancer and all them, why would I NOT recall the most famous reindeer of all?

That has bothered me ever since it occurred to me. Now I’ve been looking for other examples of silly lyrics in Christmas songs.

One of my least favorite songs is “All I Want for Christmas Is My Two Front Teeth” (although I love the cover of it by The Count of Sesame Street). “Been so long since I could say/ Sister Susie sitting on a thistle.” (Have I mentioned that before? Note to self: look at last December’s posts before I publish this.)

Has anybody ever in their life said that sentence at all, let alone felt sad that they hadn’t said it in a long time? Can I just say, if you have a sister of whatever name who is in the habit of sitting on thistles and that forms a large part of your conversation, with or without teeth, I would advise you to get out more (that’s not a run-on sentence).

(Note written later: I looked at my last December’s posts but did not read through them all. I think I’m good).

And another thing: why didn’t anybody offer to walk Grandma home? Or maybe go fetch her medication for her? Maybe they were all drinking too much eggnog, but that reminds me, should she have been mixing her medication with eggnog? A good question for Grandma’s pharmacist.

Oh, and before anyone gets snarky about it, obviously the eggnog was spiked, by implication if not by actual booze.

That’s all I’ve come up with so far. I intend to continue listening to Christmas music, however, so I will report further as developments warrant. Maybe on Lame Post Friday.