Well, I think I finally upgraded my WordPress account and can share new pictures.   I think I did it wrong and paid more than I had to, but never mind that. Let’s see some new pictures!

I took some pictures at yesterday’s rehearsal for Love’s Labour’s Lost, the Shakespeare play being presented by LiFT, Little Falls Theatre Company during the Canal Days celebrations in Little Falls,  NY this August.  Wow, what a mouthful.  And not nearly as graceful a mouthful as some of our speeches.

Full disclosure: I really took these pictures in hopes of submitting them with an article I hope to write for Mohawk Valley Living magazine.  As of this posting I have not yet written said article.  Judge me if you are so inclined. 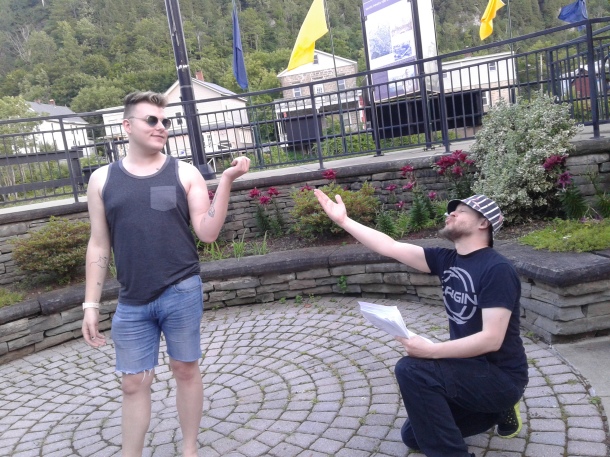 Here is another disclosure:  I am sitting on my front porch, pecking in one letter at a time with the stylus on my Tablet, looking up every so often to watch it get dark (one of my favorite things to do), and I am tired.  I shall end this post with some information I should perhaps have shared earlier.

Love’s Labour’s Lost will be presented Saturday and Sunday, August 13 and 14 at 1 p.m. at Benson’s Landing, Little Falls, NY.  Local readers, I hope to see you there.

So after skipping Tuesday entirely and making Wednesday’s post early Thursday (why didn’t I bill that as a Wuss-out Wednesday? Missed a bet), I took a Blogger’s Sick Day, and unfortunately I mean a literal sick day by not posting at all. It was also a half sick day at work, as I left after four hours and went home to bed. On previous Blogger’s Sick Days I have managed to post a small, whiny thing explaining why I was not making a post. I am becoming a very bad blogger.

It is now early Friday morning. I believe I am well enough to make it through the day at work. As I wait for the cable to re-boot (cable’s sick day?), I thought I would try a Throwback Thursday Post. I only hope my Media Library will not be as recalcitrant as it usually is.

This was when LiFT, Little Falls Theatre Company did The Tempest in 2017. I almost wept with happiness when I saw that summer Shakespeare is returning this year (preview of coming attractions).

Here are a few more Tempest characters. I guess I don’t have a whole lot more to say. But when LiFT gets going again, I hope for many good posts. Maybe I can have a new feature: Theatrical Thursday. As always, I hope you’ll stay tuned.

They Say I’m a Character 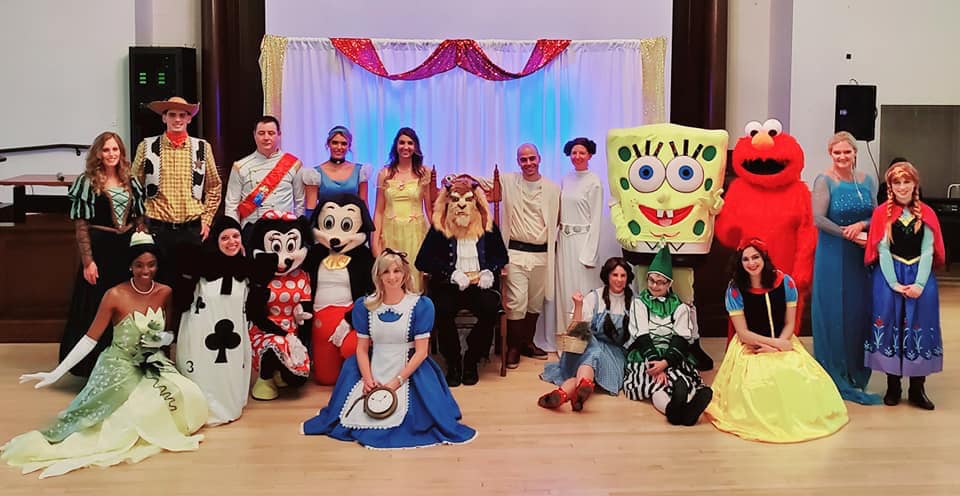 In lieu of my usual Lame Post Friday,  I thought I would share some cool pictures from the RCIL Character Brunch, which I participated in last Saturday.  It was a blast!  I stole the above picture from the RCIL Facebook page.  I also took a few with my Tablet.

Snow White turned her back, because she had a mouthful of donut.

Unfortunately I could only take pictures in the room where we hung out before the event.  During the event, I was busy dancing, signing autographs (really!), and generally being a character once the event started. But I think my backstage pictures are fun. In the above shot, the foreground features Alice of Alice in Wonderland with one of the Queen of Hearts’ minions (I know you think a minion is a goofy yellow guy in a Facebook meme, but it is also a generic term for an underling).  The Beast from Beauty and is in the background, without his head.

A kind of artsy shot (or do I flatter myself?) shot of Elsa getting ready.

What I really enjoyed was the eclectic quality of the gathering.  I think at the time I used the word “eclecticness” which may or may not actually be a word (surely you don’t expect me to look it up on Lame Post Friday) (and I will call you Shirley if I feel like it).

A Jedi knight and Sponge Bob.

I wish I had gotten some better shots of these folks.

Some time when I’m feeling less lame, I’d like to write more about RCIL and the brunch.  For now, I leave these pictures and a wish for a Happy Friday for all.

Almost Too Tired For Words

I am sitting on my couch typing into my Tablet one letter at a time with the stylus (with occasional help from the predictive text thingy).  I am just so tired these days!  Once I am quite finished with this play, I will try to lead a healthier lifestyle.   At least I will get more exercise.   I really think exercise is the magic elixir that will make all things better.

In the meantime, I need to make a blog post now.  Oh, wait, I can go for a Wordless Wednesday !

I begin with one of the reasons I’m so tired.   SO worth it!  Theatre is my life!

This is a memory and kind of a preview of coming attractions.  Next weekend,  I might be doing a fun fundraising thing with some or all of these folks.  I’ll write more about that later, and hope to have some pictures to share. 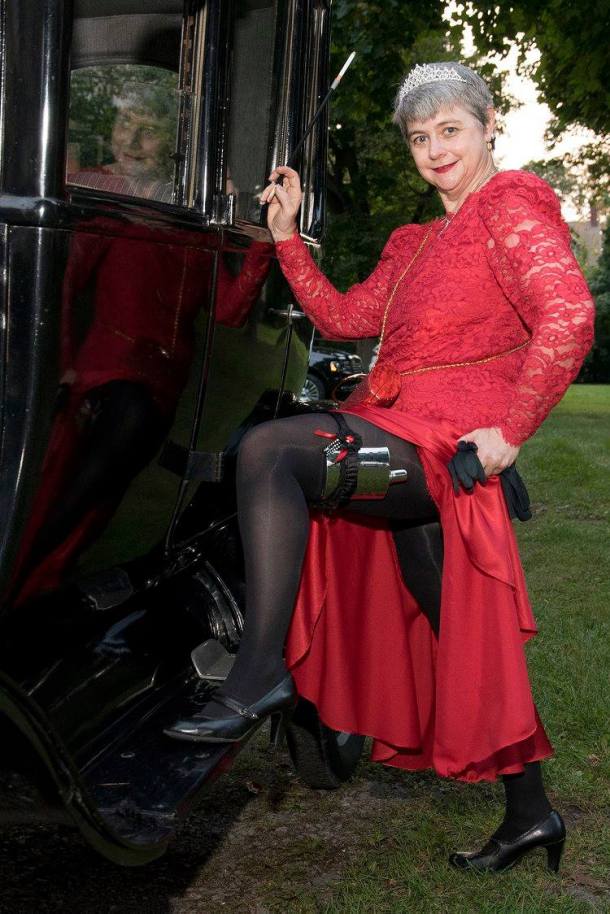 I wear those same shoes in Mornings at Seven.

I like to have three pictures,  so here is one of me participating in another fundraiser,  a couple of years ago.   Yes, I show off my legs at almost any opportunity.

So here is my Not Exactly Wordless Wednesday post for the week.  Perhaps I should try to get to bed early.

Our director, directing one of our actors.

I promised pictures of rehearsal then almost forgot to take any.  These few shots were taken at the end of our rehearsal. I guess I could not have taken many during rehearsal,  because I was on stage most of the time.

This lady is really good in her part.

The rehearsal was for Morning`s at Seven, the play I’m in at Ilion Little Theatre.  It was a short but useful rehearsal.  Only three cast members were there, so it would be a good idea if I bring my Tablet to future rehearsals as well.

Well, this is a short, kind of dull blog post.   I comfort myself with the fact that at least it is about something and not just whining that I can’t make a decent blog post right now.   Additionally,  I am posting on my Tablet, typing one letter at a time with the stylus .  Regular readers know how I hate that.

So I close now and say Happy Sunday.  I feel pleased with myself that I am not posting it Monday morning .

To Blog or Not to Blog

Today’s mantra is, “Less stress.”  I have very little reason for stress.  OK, that’s a polite fiction I am telling myself.  The fact is, we all have reasons for stress, and stress is not always a bad thing.  However, since this is not Lame Post Friday, I will not philosophize (half-bakedly or otherwise) on stress.  Instead I will attempt a moderately amusing Non-Sequitur Thursday post.  I think I’ll use pictures.  I think Steven may have downloaded a couple of new ones…

This is LiFT rehearsing The Tempest at 120 London Bridge,  Caroga Lake, where we will perform on Saturday at 6 p.m.  It is a donation-based performance. I’m not sure what the suggested (or requested) donation is.  It is a lovely space to perform in.  Incidentally, I am the one in yellow tights, Acting (yes, it needs a capital A).  The photo was taken by Matt Powers, our director. 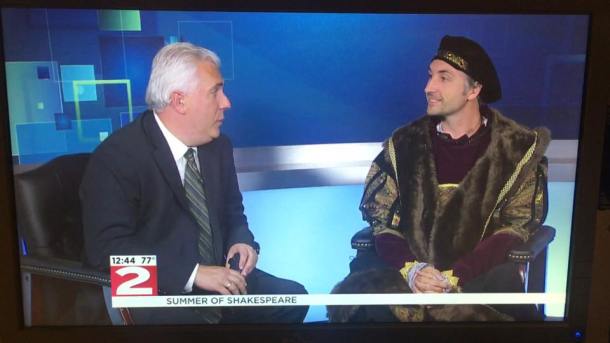 I missed him on TV!

Recently, Matt went on NewsTalk on WKTV to talk about LiFt and Shakespeare.  This is not what he will actually wear in The Tempest (he has two roles), but I think it was quite a theatrical choice for publicity purposes.

I’m not sure who took this photo; it was on LiFTs Facebook page.

To include three photos, as I like to do, here is one from early days of rehearsal, at Sterzinar Park, Canal Place, where next weekend’s performances take place.  I’m the one center stage, looking fairly ridiculous in the big old hat with a sweatshirt tied around my waist.  I tied on the sweatshirt not because I had tied one on (sorry; just had to make the play on words), but because I wanted something to put my sword through.  We had just started working on them.  I have a better looking sword holder now.