This morning, when I still had high hopes of this being a good blog post, I took a couple of pictures of flowers in our yard.

I love my Rose of Sharon.

The picture I took of our Rose of Sharon earlier this week was rendered problematic by the placement of the sun.  Today I got out in the morning, when the sun was conveniently placed on the other side of the house.

I took two views, although I see now that they are none too different.  No matter.  I feel they are different enough to include both.

I feel a little brave, showing my lack of attention to weeding.

I have a few more blooms in my Black-eyed Susans.  As I took the picture, I scolded myself about all the weeds.  As I have said before, I really must up my gardening game.  I did not take another picture of my Brown-eyed Susans,  because they did not look much different from the last picture I took. 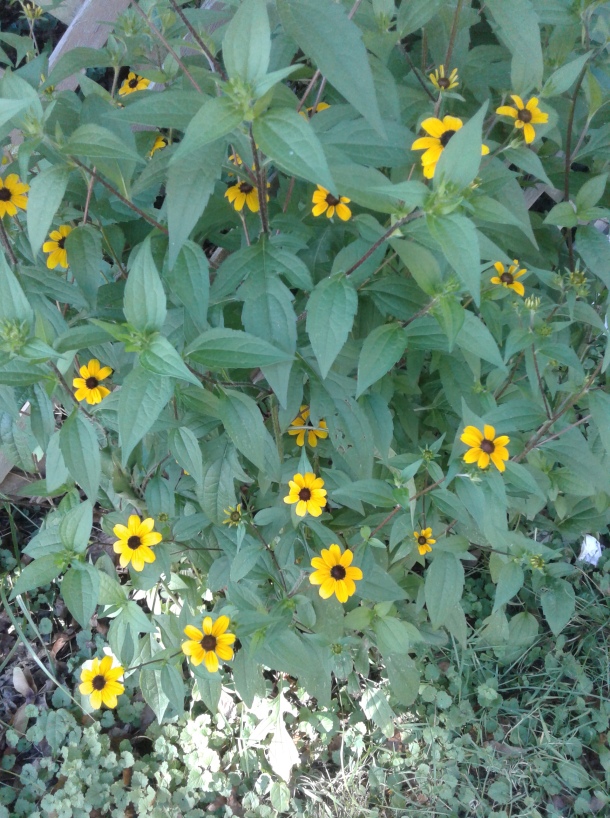 This is the last picture I took.

I hope this is sufficient for a Floral Friday Post (is that a real category?  I guess it is now).  In any case, I guess it is enough for Lame Post Friday.  Let us move on to our weekend, shall we?

There! I feel better now!

I like flowers.  They make me feel better.  I was sitting here trying to begin my blog post, and I backspaced over several leads, erasing others while they were still in my head.  What IS my problem?  Oh, I don’t expect any of you to figure it out.  Just throw your hands in the air (like you don’t care), and enjoy  a few pictures of my yard.  The above is my front yard.  I do not remember what year the daisies showed up, but they are sure out of control now.  I love it.  I only hope they don’t overpower the peony bush

Astute readers may notice that I capitalized Peonies in the caption while I did not do so in the preceding paragraph.  That is because in the caption I am directly addressing the buds, so Peonies are like their names.  I guess they all have the same name (I just flashed on a Dr. Suess story about a certain Mrs. McCave, who had 23 sons and she named them all Dave).  I saw some other peonies in the neighborhood that bloomed (must try to run by them and take a sniff on tomorrow’s run), so I’m sure mine will be opening soon. 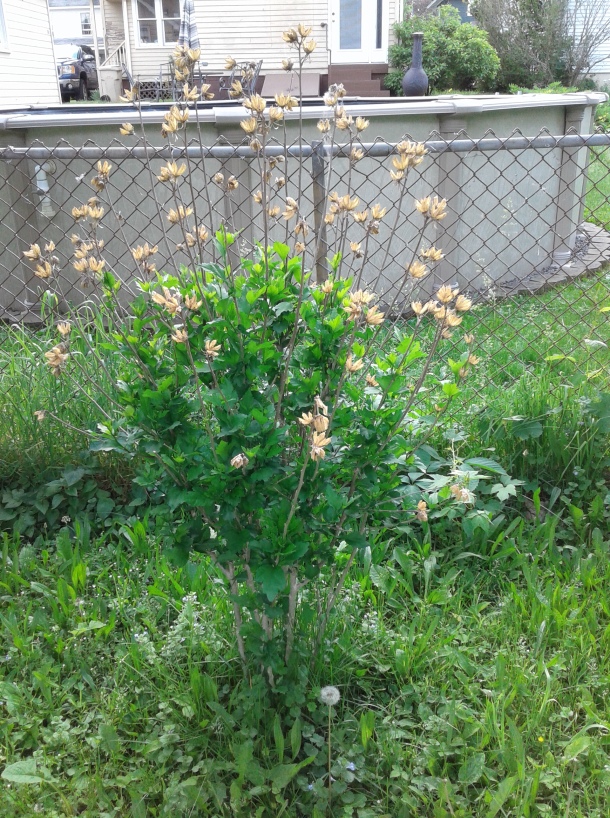 Hmmm…. It looks better in real life than it does in the picture, but you’ll have that.

Also under the heading Preview of Coming Attractions is our Rose of Sharon.  At least there is more green on it than previously.  My mother, who gave us the plant, told me we did not have to prune back the old branches or even pull off all the brown stuff.  At least, I think she told me that.  I’ll have to double check the next time I call.

Another plant that is better in person. Next time I’ll try to zoom in on them. If I can figure out how.

I do love forget-me-nots.  These just magically appeared near the rhododendron and spread a little more each year.  I would love to have a whole yard of flowers and never have to mow.  Maybe one day. 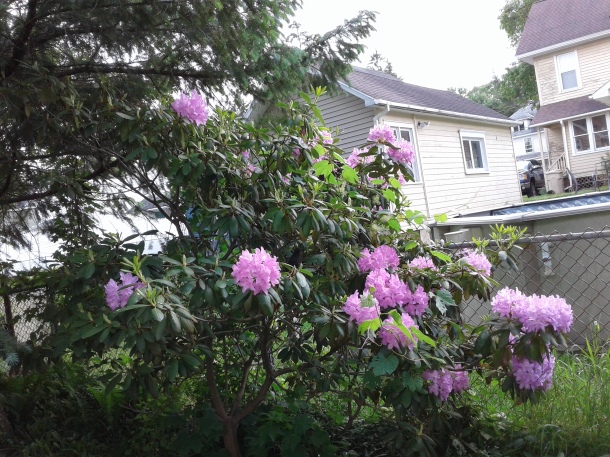 A little overshadowed by the pine tree, but beautiful blooms.

I think the rhododendron is lovely, too.  That is another one we did not plant.  It wasn’t looking so good until one year when I broke off a bunch of dead branches.  Who knew I could do something right in the garden?

I supposed I should have weeded before I took the picture, but I think you can see how beautiful they are.

This is the reason I was outside with my Tablet on Camera Mode: my irises, another gift from my mother.  She has had irises at her house for as long as I can remember, and periodically she has to thin them out.  Her iris bulbs have bloomed as far away as Arizona!

As these pictures show, I have not done much with my flowers except let them grow.  I hope to get outside tomorrow and do some weeding.  Maybe I could take some nice After pictures of neat, orderly flower beds.  That would be a change from Wrist to Forehead Sunday.  If it rains, I’ll probably watch monster movies.  It’s always nice to have a back-up plan.

I thought I would call Olney’s Flowers in Rome, NY, which is where my mom and dad live. Olney’s did the wedding flowers for me and all my sisters, so I knew they did nice work. Serendipitously, I saw an ad for them on the television. I had Steven make a note of the phone number but in fact it is a very easy number to remember: 339-6000 (perhaps not as memorable as eight-six-seven-five-three-oh-ni-ee-ine, but very good for a business, I think).

The advertisement had particularly mentioned their hanging baskets. My other thought had been something Mom could subsequently plant in her yard. However, while talking to the nice lady at Olney’s, I realized planting flowers is work. A hanging basket Mom has only to hang and enjoy. I went with the hanging basket. I set delivery for Mom’s birthday and felt pleased with myself.

Imagine my chagrin when on the morning of Mom’s birthday I read a Facebook post from a sister hoping Mom was having fun in Pennsylvania. PENNSYLVANIA??? I didn’t know she would be in Pennsylvania on her birthday! What a dumb place to go on a birthday when you are supposed to be home receiving a hanging basket from Olney’s!

OK, it’s not a completely dumb place for my parents to be. They have a daughter in Pennsylvania who has a daughter of her own who happened to be graduating that weekend. I’m sure it is quite logical for my mom and dad to be in Pennsylvania. However, I am also sure she neglected to mention to me her plan to be there on her birthday. Nobody ever tells me anything!

Luckily I had looked at Facebook early in the morning. I got on the phone to Olney’s almost as soon as they opened (I tried to wait till at least 8:01 just to be on the safe side, but I was a little agitated). The woman I spoke with said her family never tells her anything either and she nicely put the delivery on hold till I could find out when Mom will be back in Rome.

I later learned that Mom and Dad planned to return on Monday. I called Olney’s on Monday and re-set delivery for Tuesday, since I couldn’t be sure what time on Monday would be good. My only hope now is that Mom gets her flowers before she reads this blog post (she is one of my subscribers, after all).

Just a quick plug for a local business today. I may have mentioned I am in a play with Ilion Little Theatre this weekend and next. There are a number of new people in the cast, new to ILT and new to any stage. I thought I would do something special for opening night.

I remember years ago in high school, people giving their friends flowers for opening night. My mother told me the leading lady got roses, that was all. In fact, she gave me two lovely roses when I was a leading lady once, but that is another memory. I know in movies where they show plays, somebody hands the leading lady a bouquet of roses while she takes her final bow, but I’ve never seen that in real life.

Be all that as it may, I thought to get everyone in the cast as well as the accompanist and sound/lights guy a single bloom. I realized carnations were more in my budget than roses. Anyways, they last longer. I made a phone call.

I drive by Flowers by Suzanne on Mohawk Street in Herkimer, NY almost every day on my way home from work. Steven got me some lovely roses from them one Valentine’s Day (I guess I’m his leading lady) (sorry, had to say it). I ordered eleven carnations, in yellow if possible (there is something in the play about goldenrod, so I thought yellow carnations was close enough).

Friday after work I picked them up. As I walked to the door of the business I got a wonderful whiff of lilacs from a big bush nearby. I must plant some lilacs in my yard. The nice people at Suzanne’s were able to accommodate my request for all yellow and even threw in an extra, in case something happened to one. I grabbed a handful of little cards to write something nice on and was on my way.

As I sat in the car waiting for Steven (I had to pick him up at work), I wrote the cards. And realized I had miscalculated. One card short. I had been going down the cast list writing the cards, so the accompanist got shorted. I had the right number of little envelopes, so I wrote a note on a small piece of notebook paper. It turned out to be OK with the recipient, as it turns out. I had written “Well, this is embarrassing” on the outside of the notebook paper after I had folded it in half. She was highly amused

People were very pleased with their flowers, and I felt I had added to the ambiance of opening night. Anyone needing to add ambiance to any of their occasions can happily go to Flowers by Suzanne. They are located at 433 Mohawk St., Herkimer, NY, 315-866-0206.