We needed to get my husband Steven a ticket for the Great American Irish Festival in Frankfort, so we headed to the Price Chopper in Little Falls.  Of course I cannot go to Little Falls for just one thing, so we also got a mid afternoon snack at Ruggiero’s Trattorio.

One of my favorite places for drinks and food.

We have eaten there before.  Our favorite place to sit is the bar, which is where we sat today.  We had some Chardonnay.  I got a bowl of French Onion Soup while Steven had a slice of pizza.  I had a bite or two of his pizza.  It had sausage, peppers and mushrooms. Yum!  I adored my soup. It felt so good on my stomach!

Steven enjoying a sip or two.

A fellow sat two seats down from us at the bar and gave the bartender a bottle of blueberry beer.

“I have to love a guy who pulls a bottle of beer out of his pocket.” I told him.

He told us how he likes to try different kinds of beer, but you often have to purchase a six- or twelve-pack at a time, so he sometimes gives some away to people he thinks will like them.  I referred him to Beer Belly Bob’s in Ilion, because he has a rack where you can mix and match a six-pack of craft beers.

We had a fun time there. I also got a picture of our bartender Carly. 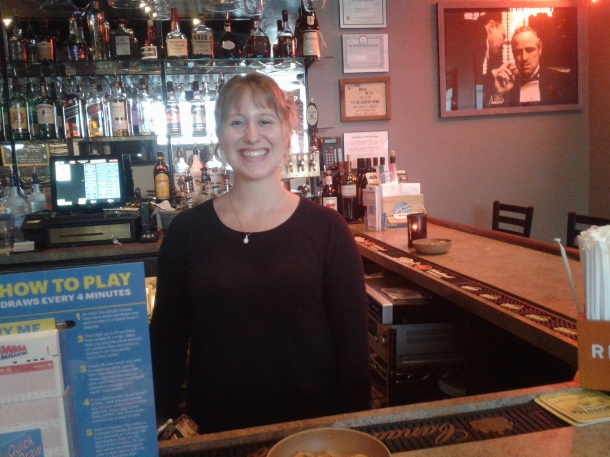 A good bartender with one of my favorite names.

So Herkimer Diamond Days kicked off this evening.  I noticed folks setting up for a chicken barbecue and food trucks while I was running this afternoon (short, muggy run, not worthy of a Runny Commentary post). I got home and told Steven what I had seen.

“I wanted to get a beer and sit in front of the End Zone Pub,” I told him.

We did.  Our friend Kim joined us.  What a fun time!

The End Zone’s kitchen was closed, but Kim and I got beers and we sat down at a table on the sidewalk.  Steven checked out that food trucks and one that offered hot dogs (I foolishly did not get its name).  He has been craving a hot dog.  He got a hot dog and french fries.  It looked so good that I went and got a hot dog for myself.  Yes, I ate some of Steven’s fries, don’t judge me! We settled down and watched the crowd.

Steven got a drink after he got his food.  After Kim and I finished our beers, we wanted to try something called Gem Juice.  For one reason, you got to keep the cup.  In fact, the cup was only a plastic one with a beer logo on it.  I was hoping for something about the Diamond Days or at least the End Zone.  However, the drink was damn tasty.  It was gin, run, vodka and clear fruit juice.  They told me the exact proportions, in case I wanted to make it myself at home, but I do not remember what they were.

“I can just add more to taste,” I suggested.  I am more fond of gin than of vodka.  On the other hand, I am not at all sure I will be trying this recipe at home any time soon.

Full disclosure:  the Gem Juice gave me a bit of a buzz.  I don’t drink much of the hard stuff lately, I guess it goes right to my head.  The point is, we had fun.  And it is Lame Post Friday.  I hope your Friday is equally as fun.

Return to the Tavern

I confess to knowing an impulse to make this blog All Monster Movies All The Time, but then I wouldn’t really be Mohawk Valley Girl, would I?  With that in mind, I give a shout-out to Gerber’s 1933 Tavern in Utica, NY, a really wonderful place for drinks, food and fun.

I first went to Gerber’s a few months ago, for a Prohibition Party (perhaps you read my blog post about it).   I had been wanting to take Steven there ever since.  When we met our friends Phyllis and Jim to celebrate their anniversary, we discovered they had never been there either.  We went and had a blast.

The tavern used to be a speakeasy during prohibition.  It still looks old-fashioned and cozy, with a tin ceiling and beautiful woodwork.  We found a table and perused the menus.

You can see the beautiful ceiling.

I had my Tablet with me so took a few pictures.

This is the happy couple.

Naturally I had to get one of the anniversary couple.  Phyllis and Jim are two of the all-time coolest people ever.  Jim has been in a number of theatrical endeavors with me and/or Steven.  In fact, we met them through Ilion Little Theatre.  Let’s hear it for community theatre! 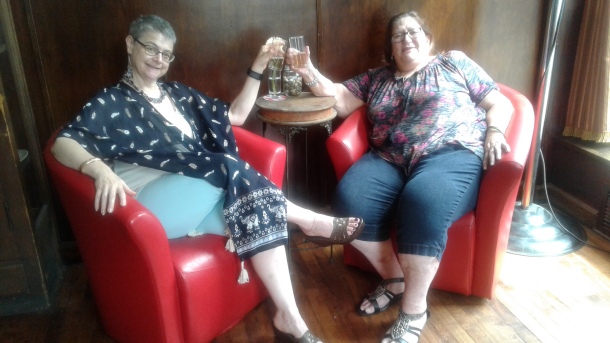 Me and Phyllis, toasting friendship.

I had been looking at the red chairs while we ate, then asked Steven to take a picture of me and Phyllis in them.

Steven and Jim with our bartender, Larry.

Of course, I also wanted a picture of the guys.  I included our bartender, Larry, who I declared to be our New Best Friend.  Yes, I had consumed a couple of glasses if Pinot Grigio when I made the declaration.  Don’t judge me.  Incidentally, it was Thirsty Owl Pinot Grigio, a Finger Lakes wine.  I have to love a tavern that serves New York State wines.

Gerber’s 1933 Tavern is located at 16 Liberty St., Utica.  For more information you can visit their website at gerbers1933tavern.com.

“Would you like a glass of wine?” he just asked me.  He really is a most satisfactory husband.

So at Christmas my sister (my dear, DEAR sister) Cheryl gave us a gift card for Applebee’s.  I know, I don’t usually plug chains in this blog, but Herkimer Applebee’s is really an exemplary link in the chain.  Additionally, I am amused by the story of tonight’s drink of choice.

Last October, I was in Applebee’s with the large cast of Splitting Issues, the play Steven and I were in at Ilion Little Theatre.  I was not drinking, due to a tiresome medical issue which I will not bore you with at this time.  I was also fighting a dreadful cold, but I managed to have a fun time anyways.  That often happens when you hang out with theatre people.  As we were leaving, I caught sight of a drink being enjoyed by the wife of a fellow cast member.

“Is that an upside down beer in your drink?” I asked, awestruck.  It was.  It was, in fact, Corona, one of my favorite beers (as well as a pretty good typewriter).  I promised myself that one day I would go into Applebee’s and have “one of them there drinks with the upside down beer in it”  (yes, that was precisely how I planned to ask for it).  Today I had that opportunity.

We were lucky enough to get one of the tall tables in the bar area, which I love to sit at.  Steven pointed out on the “Featured Drink” card a drink with an upside bottle of Reunite Lambrusco.  I asked the waitress about it, mentioning the one with the beer as well.

“That’s the Corona-Rita,” she explained.  “After that, we came up with the one with Reunite.”

I opted for the one with the beer, because Lambrusco is sweet and I prefer dry wine.

I confess, I was a little disappointed in the drink.  I think in the future I’ll stick with their Perfect Margarita, which I have enjoyed on many occasions.  Or a glass of wine. However, I was happy I finally had my drink with the upside down beer.  We got some appetizers, too, which were pretty tasty.  All in all, a very fun evening out.  In fact, it was not in the least bit lame, but this being Lame Post Friday, I went with the headline I did.  Happy Friday, everyone.

An Umbrella to the Waterfront

For Lame Post Friday I posted then sipped.  For Wrist to Forehead Sunday, I sipped and now am posting.  Yes, drink and type.  It has happened before, it will happen again.

When Steven returned home shortly after 1 p.m., we were not sure what we wanted to do but eventually settled on Waterfront Grille in Herkimer, NY.  What a good choice!  When we pulled into the parking lot we had our doubts due to the large amount of traffic.  However, I said we should go into the restaurant and see how many seats were actually available.  After all, the cars could be people taking a Canal Cruise or shopping at Gems Along the Mohawk.

It was raining so we utilized the umbrella Steven had in his car.  It was not big enough for the both of us but luckily it was not that large of a distance from the far end of the parking lot to our destination.  I should perhaps mention that I had donned an elegant outfit that included sandals with a high wedge heel.  They are not very uncomfortable, but, still, a high heel is a high heel.  On the other hand, I was quite pleased with my elegant outfit.

We had a delightful time sitting at the bar, sipping wine and nibbling on appetizers. I mean to write a whole blog post about it, but for right now, I intend to continue sipping.  I am having a wonderful Sunday, not really Wrist to Forehead at all.  I hope you are having a similarly enjoyable time.  Hope to see you again on Mental Meanderings Monday.

After the play on Friday (The Psychic at Ilion Little Theatre, it’s on again this weekend; go see it if you can), a bunch of us went to Applebee’s in Herkimer, NY for drinks, food and laughs. I don’t usually plug chain restaurants as Mohawk Valley Girl, but I have mentioned Applebee’s positively and I will do so again. We had a great time.

Steven and I got there first. I counted on my fingers how many were expected (I didn’t have enough). Was the big booth big enough? Should they push tables together? Two gentlemen at a nearby table volunteered to move if need be, but it was not necessary. Soon we were all seated around three tables pushed together (or was it four?) and sorting out with our waitress who went on whose tab.

Our waitress was fun and chatty. She explained her system of assigning us numbers. She was pleased to have such a large table, because her section was fairly quiet at the time. We ordered drinks. Some got appetizers, a few people got full dinners. Steven and I were still full from Sorrento’s, but we did sample a couple of our friends’ appetizers when invited to. Also, there was a large olive in my Perfect Margarita. That counts as a vegetable, doesn’t it?

I stayed up way past my bed time. When I asked the waitress for our check, she said, “But I don’t want you to go!” I didn’t particularly want to go, either, but I sorely need my beauty rest (cue jokes about how there isn’t enough rest in the world etc.). I hope it isn’t too long before I have another fun night out with friends.