I thought I would make a short post to let my readers know I am taking a Blogger’s Sick Week.  It started with a cough on Tuesday and went downhill fast from there.  There is no point and little entertainment value in giving a blow by blow of my hideous nights, trip to Urgent Care, worry about my job for which I have not accrued much sick time…

Oh dear, I suppose that is quite a bit of whining for one paragraph.  In my defense, I feel TERRIBLE!!!  And nothing helps!

This is what happens with these illnesses that last for more than a day.  All I want to do is sleep, but  I can only sleep so long.  Does everybody have that problem?   I have not been knocked out by OTC decongestants and cold medicines in a long time.  That is how powerful my insomnia has become.

I have now established that I cannot do anything right now other than feel sick, and that includes making a decent blog post.  I hope my readers will forgive me and tune in again when I make a better blog post.

I Stress, But I Blog

Today is Tired Tuesday but it may as well be a Blogger’s Sick Day.  I left work after four hours due to a headache.  A nap helped a little,  but I am under stress.  Oh, get over yourself, me, we all have problems!  And so I try to at least make a blog post.

And nothing is coming.  I looked in my Media Library for a timely graphic but can find none.  What, I ask, is a blogger to do?

A depiction of how I feel.

This is  not what I was looking for,  but I find it appropriate.  I feel like a blob, oozy and a little disgusting, although I do try not to be as clingy.  People hate that and it never works.

No, I do not think I look like this.

No, this is me, a lost soul.  Now I really sound like I’m feeling sorry for myself.  I hope I am not.  But I need to find a way of dealing with all my stress.  There is no reason to burden you lovely people with it.

An oldie but a goodie.

I leave with a Tuesday meme.  The week progresses.  So will I, but right now I need a little more sleep.

I started a blog post last night but did not finish it (obviously).  I tried to finish it this morning but got bogged down in a morass of words about being depressed.  It felt whiny and pointless, so I stopped (although I did save it for possible future use).  I want to publish something, so I am going to throw in a few monster pictures and call this a Monstrous Blogger’s Sick Day (depression is an illness, although I feel somewhat fraudulent using it as an excuse) (never mind that, on with the post).

This is from Carnival of Souls, an excellent example of how a movie can be quite unsettling on a low budget and minimum of special effects (you know, it is much easier to italicize words with a mouse than on a Tablet) (just to throw in a little computer chatter). 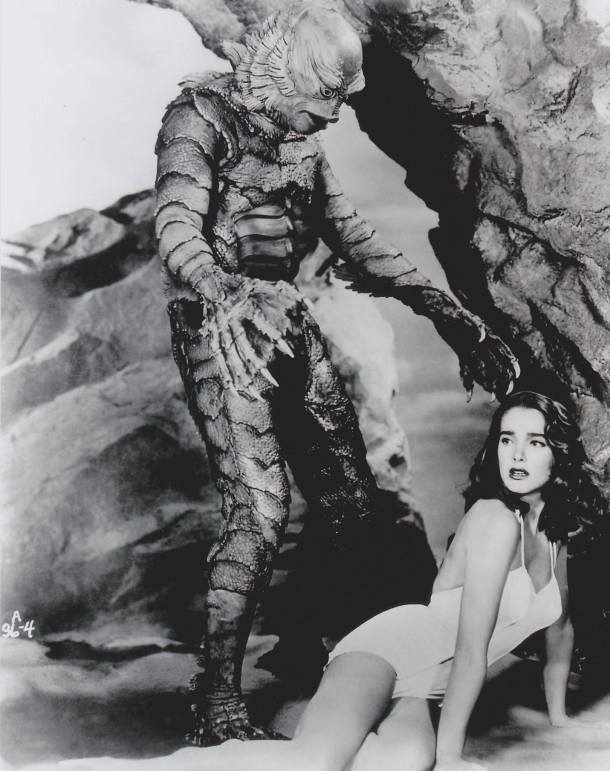 My depression looming over me? Only I do not look that good in a bathing suit.

A little Creature from the Black Lagoon never hurt anybody.  Some people find it helpful to picture their depression as an animal that follows them around.  I wonder if a mind trick like that would help me.  I could picture it as a monster and make friends with it.

Invasion of the Happiness Snatchers?

Or I could fight my depression with a pitchfork, and a little help from my friends.  The pitchfork only provided temporary relief in Invasion of the Body Snatchers, but it certainly made for a dramatic moment.  Regular readers know I love drama.  I wonder if the pod people could be worked up to a full metaphor for depression.  That might be something to play with sometime.

And now I see I am approaching 300 words, with very little effort and only a minimum of whining.  I will make a greater effort toward even less whining, and as always try for a better blog post next time.  Once again, thank you for tuning in.

Luckily, Blog Posts Don’t Have To Be Perfect

Today is a Blogger’s Sick Day.  That is when I spend a few words whining about how terrible I feel and call it a post.  Maybe I could share a few pictures to pep things up, maybe get a little Throwback Thursday into the mix.

I looked in my Media Library at September 2017 and found this delightful shot.  It is members of LiFT,  Little Falls Theatre Company, at the Ritz and Ragtime fundraiser for the Landmarks Society of Greater Utica.  I wish they would do one of those again.  I have a couple more 1920’s outfits to choose from. 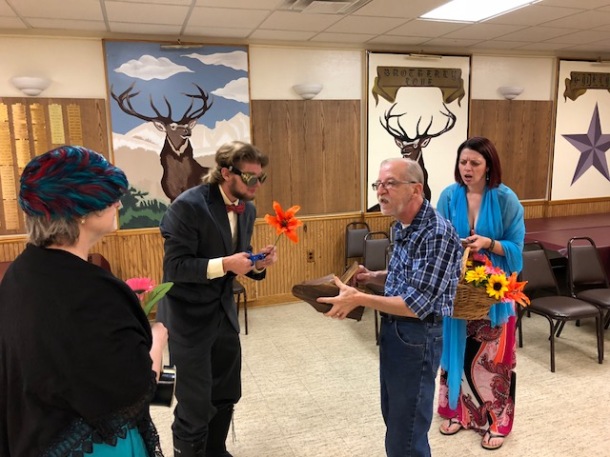 This was in September 2018, Donate to Murder at the Herkimer Elks Club.  It was an interactive murder mystery which I just happened to write.  I need to start writing again. 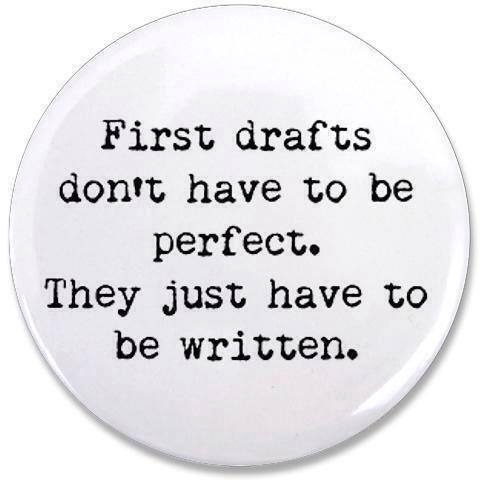 Good advice for me.

I need to make this my mantra.  I could hang it on my wall.  Or maybe tattoo it on my forehead, backwards, of course, so I could read it every time I look in the mirror.  Unfortunately,  or perhaps fortunately,  my forehead is not that big.

In the meantime, it seems I have managed to make a blog post in spite of feeling rather ill.  Perhaps it is not a very good blog post, but you’ll have that.  I am going to try for some sleep, and a better blog post tomorrow.  As always, thank you for tuning in.

Monday was a true Blogger’ Sick Day. I will spare you the sordid details, but I left work early and spent most of the rest of the afternoon and evening in bed. I do not feel a whole lot better today, but a cup of hot tea seems to be helping. I will feel better mentally if I manage to make some semblance of blog post.

I went for a shortened walk this morning. I thought the fresh air would do me good, but the humidity rendered the air heavy. It also started to rain. That was all right with me. I needed the extra time to send a couple of emails, make this blog post, and fix today’s lunch (I’m going to make things easy on myself there and bring one of those instant soup cups). The emails have been sent, and now I must think of something at least mildly entertaining to type (I am on the laptop, using all ten fingers, yes!).

Since I missed my Monstrous Monday post, I took a chance and checked my Media Library for a monster picture to share. Sunday when I was looking for pictures for a Sunday Cinema post, I seemed to be missing a number of photos I remember using before, so I was worried some monsters would be missing as well. I am delighted to find my favorite, Nosferatu.

How about a Post-Rehearsal Post? I would normally end that sentence with a period not a question mark, since I intend to go ahead and make the post anyways. However, this evening I entertain doubts of my ability to do so.

By the way, “entertain doubts” is one of my favorite expressions. When you entertain doubts, how do you do it? Do you invite them into your parlor and serve tea? Or do you do a little song and dance, maybe some stand-up comedy? I lean towards the latter, being a theatre geek, but the idea of treating doubts as my honored guest also has its appeal.

I am doubting my ability to make a blog post, because I have a whanging headache (no, autocorrect, I do not mean a changing headache; I wish it would change!). I started to get it at rehearsal, as the sun seemed to set right into my eyes. It was even worse on the ride home. Kim was driving, so I must count my blessings. I took a couple extra strength acetaminophens when I got home, so that is another blessing I can count.

So this is my blog post. I can bill it as a Tired Tuesday or a Blogger’s Sick Day, but I guess it is really yet another Post About Why I Can’t Make a Blog Post. Once again, thank you for tuning in.

I am taking a Blogger’s Sick Day. I should be at rehearsal as I type this (on the Tablet, one letter at a time with the stylus) (why do I always feel the need to say that?). I never miss rehearsal! I guess I should say almost never. Oh dear.

Why is my Tablet underlining the second “rehearsal” in the previous paragraph? Another mystery to ponder. However, I will ponder it later. Now I am going to lie down. No doubt I will feel better tomorrow.

Mohawk Valley Girl feels like shit. And autocorrect is determined to clean up my garbage mouth. I really feel too awful to post at all. However, I logged into WordPress to catch up on my favorite blogger, Rachel Mankewicz. She posts every Saturday with insightful essays punctuated by pictures of her adorable dogs. I found myself typing in a comment. Then I was reading and commenting on other blogs, and I said, Hey, maybe I can do this.

But I can’t, really. I need to put this aside and lie quietly. When I log in again, I will try to add a link to The Cricket Pages, and maybe plug a couple other of my favorites.

Once again, I had such a good Saturday that I did not make a blog post. This is not really a blog post, either, but more of an apology for not making a blog post yesterday.

We did everything on the agenda I outlined on my Lame Post Friday post. We had a fun time at each event. I need to write blog posts about them.

For right now, however, I have a headache. Too much red wine? Falling asleep on the couch and getting a crick in my neck? Cold air and sinus problems? Any number of other headache causes?

And here’s a weird thing: my Tablet is underlining “neck” but not “crick.” I always thought crick was not a real word. Oh, the Tablet underlined it in the previous sentence. These are the things I ponder on a Sunday morning when I am not really making a blog post.

I was doing so well posting every day, then last night I just fell asleep on the couch without posting. Now I have a dreadful headache from sleeping with my neck bent the wrong way. I shall try the effects of a hot shower in a bit, but I first thought I would post a quick little apology for missing a day.

Hmm…. I hope nobody reads my headline and thinks my house has rats. I do like to indulge in plays on words. Anyways, that gives me something to be thankful for: we don’t have rats and haven’t even seen any mice for a long time (hope I haven’t just jinxed myself).

So I guess yesterday was a Blogger’s Sick Day, even though I wasn’t exactly sick. I’ll try for a better blog post later. We did have a couple of Mohawk Valley Adventures yesterday.